This site will help you understand Panic Disorder and show you how to recover. And, if you're like most people with panic disorder, you can recover. Panic is a very treatable problem.

Panic attacks (or anxiety attacks - the terms are interchangeable) are intense episodes of fear which are so powerful that they trick you into fearing that you are dying, going crazy, about to faint, or losing control of yourself in some vital way. The symptoms of a panic attack feel so powerful and threatening that they convince you that you're in terrible danger.

Panic attacks aren't dangerous, but are especially effective in persuading you that yours are. This is what panic does, convince you that you are at risk. Even people who have had many panic attacks will fall for the idea that "this one won't be like the others..."

So I can tell you that panic attacks aren't dangerous, but I recognize that this is "easy for me to say". If you're having anxiety attacks, especially if they're a relatively new occurrence for you, you might not be able to believe this right now. That's entirely understandable when you feel that your life is threatened! You don't need to take anything here on faith. Instead, check it all out. Test everything I say against your own experience, as you work your way through this site.

A first panic attack is usually unexpected, and comes "out of the blue." It may scare you so much that you start taking steps to protect yourself from future attacks. Maybe you start avoiding places that remind you of your first attack. Maybe you only go out after making sure you have your cell phone, a bottle of water, and other objects you hope will keep you safe. Maybe you try hard to "stop thinking about it." You work hard to keep the panic at bay.

But over time, you may find yourself experiencing more panic attacks, in a variety of circumstances. Most of these will not be entirely unexpected. Most subsequent attacks occur in response to various cues such as entering a crowded area; a traffic jam; or simply worrying about having a panic attack. But there may still be some surprises: for instance, you might have a nocturnal panic attack, which wakes you out of a sound sleep. Or you might find yourself experiencing odd feelings of depersonalization as you kill some time with friends or colleagues. 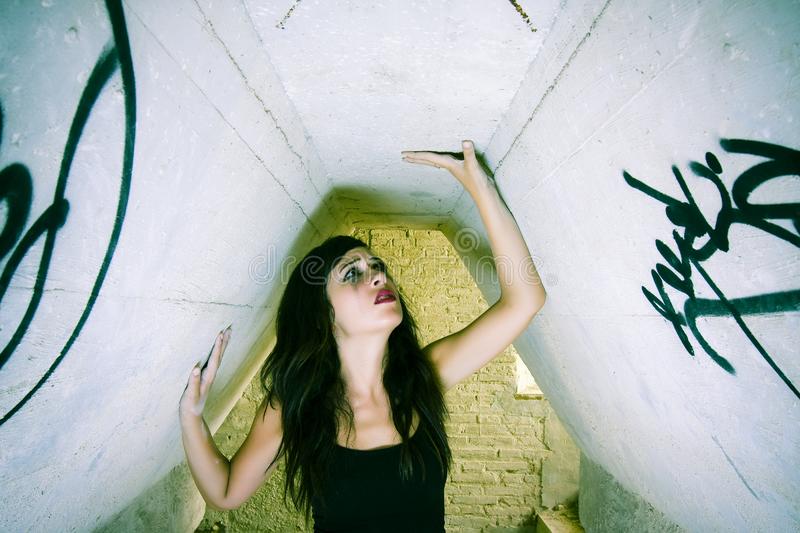 Each panic attack ends, without killing you, making you crazy, or any of those terrible things it seems to threaten. But this by itself, that you survived all your attacks without calamity, isn't usually enough to enable people to leave their fears behind.

You might think you had a series of "narrow escapes", and attribute your survival to the fact that you left the crowded store; pulled off the highway; took a sip of cool water; or talked to a friend on your cell phone.

These aren't really responses that could save your life or your sanity, although it seems to make sense at the time. But it's not reassuring to think your life hangs on something as insubstantial as a water bottle, or a walk to the parking lot. So each time you "get through" an attack in this manner, you tend to feel less secure rather than more.

This is what maintains Panic Disorder. If you believe that the only reason you lived through a panic attack was that you had some gum with you, you're not going to feel very secure going forward, and you're going to be constantly buying gum.

A key part of the recovery process will be to learn to respond to panic in ways that calm it down, rather than build it up.

People who struggle with Panic Disorder usually have a lot of questions. They want to know what causes panic attacks, and they especially want to know "why me?".

It seems logical to suppose that knowing why you have this problem would help you overcome it. But all too often, people get so focused on "why?" that they become more stuck, rather than less.

For a discussion of these issues, and some questions that are more likely to help you recover, have a look at the article What Causes Panic Attacks?

If you have Panic Disorder, the chances are very high that you have altered your life in some significant way in an effort to prevent or avoid additional panic attacks. It is common, for instance, for people to limit their travel; to restrict their driving (maybe staying within a certain radius from home, or avoiding highways); to avoid large, crowded shopping malls; and in general, to attempt to avoid any activity from which "escape" may be difficult.

Maybe you don't avoid anything, but you do things differently than before. You might bring your spouse or support person to go to places you would previously visit alone. Maybe you do everything the same way you used to, but you go through a lot of nervous anticipation ahead of time.

These efforts to protect yourself with avoidance are often the most disabling aspect of Panic Disorder, one which leads people to give up many other pleasurable and useful activities.

Panic is actually a very solvable problem, once you've come to understand how it works. A good recovery, in which you're no longer particularly bothered by panic attacks, is very attainable for most people. If you're looking for an inexpensive guide which will take you through the recovery process, take a look at my Panic Attacks Workbook.

Simply put - agoraphobia means that you avoid a lot of ordinary activities and situations for fear of having panic attacks. To most people who get this diagnosis, the term sounds pretty scary, but that's all it means. It does not mean you are or will become house bound. That can happen to people, and is an extremely severe case of agoraphobia, but the great majority of people with agoraphobia do not experience it to that extent.