Blood Phobia
and Fear of Fainting 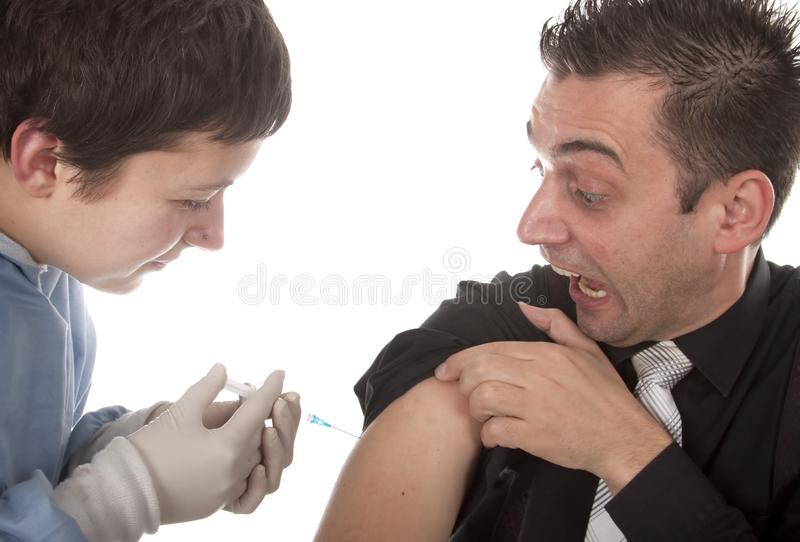 A blood phobia is a condition in which a person is likely to faint at the sight of blood, the anticipation of physical injury, or the anticipation of an injection. It's actually called a blood-injury-needle phobia, because those are the cues that can trigger a faint. With panic attacks, fainting is extremely unlikely to occur, but with a blood-injury-needle phobia, it's likely under the right conditions.

This isn't really a phobia at all, but the result of a particular biological condition. But first, here's a little background.

The Nature of Fainting

People often think of fainting as a physical catastrophe, in the same category as heart attacks. But fainting is actually a self protective response, not a sign of disease or disaster.

What causes a person to faint? Fainting is caused by a sudden and significant drop in your blood pressure. If your blood pressure drops for whatever reason, the part of your body most likely to get an inadequate supply of blood is your brain, because it's on the top. The brain, more than any other organ, needs a steady supply of freshly oxygenated blood, and it can be damaged if blood flow is impaired. That's a problem if your blood pressure drops a lot, and fainting is the body's response to this problem. If we can't get enough blood to the brain, fainting brings the brain down to the blood.

If we had our brains in our feet, there wouldn't be any such thing as fainting, but kickboxing matches would be really hard to score.

Too much of a good thing

All of us have a tendency to respond to seeing blood with a slight drop in blood pressure. This is a good thing, because if you see blood, there's always the chance it's yours. And if you're bleeding, it's good to have low blood pressure. You'll bleed less, and clot faster.

People with a blood phobia just have too much of a good thing. When they see blood (or a needle in a nurse's hand), their blood pressure drops more than average. It drops enough to make it hard to get good blood flow to the the brain, resulting in the self protective faint.

The Treatment
of Blood Phobia

Fortunately, this is a treatable problem. The treatment involves learning how to raise your blood pressure, typically by tensing and squeezing your large muscle groups, to make it harder to faint when you're about to have an injection, or to read some illustrated medical textbooks.

This treatment, systematic tensing of your muscles, is the opposite of relaxation. Relaxation can be helpful for most phobias and anxiety problems, and may be useful to you in managing other anxiety symptoms. It's not part of the treatment for blood phobia!