Fear of Public Speaking:
the Fear that Stalls Careers

You can solve the problem of public speaking anxiety. 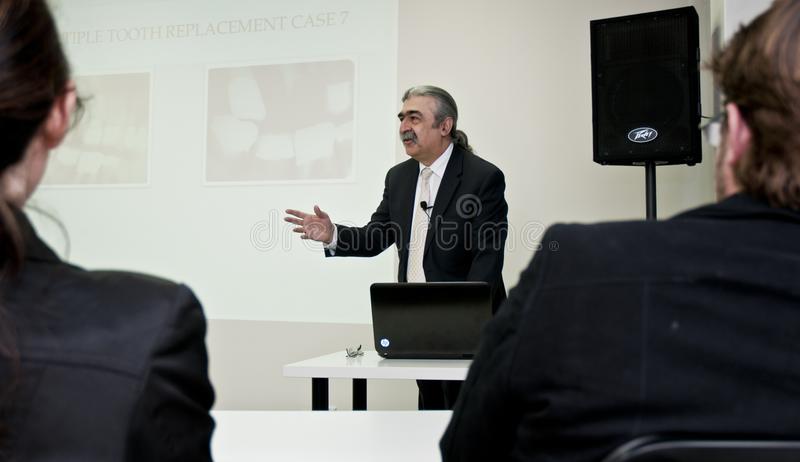 Fear of public speaking is the most common of all phobias. It's a form of performance anxiety in which a person becomes very concerned that he or she will look visibly anxious, maybe even have a panic attack while speaking. Over time, people try to protect themselves by either avoiding public speaking or by struggling against speech anxiety. In this way, people get Tricked into making the fear of public speaking more chronic and disruptive.

Others don't go that far, but will go to great lengths to avoid making presentations, or even just having to speak at a meeting. They may deliberately arrive late, hoping to miss the customary introductions ("let's go around and introduce ourselves...").

Many others will gamely accept an assignment and show up to give a speech when it's important to their career. But they try to get through those situations without feeling afraid. They focus on what they feel, rather than on the message they've come to deliver. This is often the case with people whose fear of public speaking developed later in life. The more successful they become in their career, the more they are called upon to share their expertise with groups, and the more anxious they become.

New patients who come to me for help with fear of public speaking usually expect that I will first help them lose their speech anxiety, and then they will go out and do some public speaking.

I'm usually able to help people overcome this problem. But that's not how you do it. That's how you get Tricked!

Think of the things you do during a speech, or a brief introduction, in an effort to feel less afraid. What do you do in an effort to control your fear of public speaking?

Take two minutes. Write down all the responses you can think of. Then come back here.

Fearful speakers I've worked with have included items such as:

* Skip portions of my talk

* Tell myself it'll be over soon

* Imagine audience in their underwear

* Cough, pretend to have a sore throat

* Use a lot of slides

* Keep swallowing, to make sure I can drink fluids

* Let a colleague do most of the talking

One of the first things I ask my clients is, specifically, how do you think these will help control public speaking anxiety? So let me ask you to review this for yourself.

Take two more minutes to look at your list and identify exactly how you think these measures will help you overcome the fear of public speaking. Write down your answers, then come back here.

What Do You Think?

Here's what I notice when I review this question with fearful speakers. Their strategies during a speech are designed to:

* End the speech as soon as possible

* Avoid any pauses or interruptions during the speech

* Hide the fact that they are afraid

Fearful speakers create trouble for themselves when they don't embrace the role of Speaker. Instead, they try to be the Unspeaker. They try to "get through" the experience without committing themselves to the role of Speaker. They read, they drone, they overlook the audience, and they focus mainly on resisting their fear. The result of this resistance is, typically, that it gives you more public speaking anxiety, not less - just the opposite of what you want.

Rushing through a talk requires that you talk fast. Talking fast interferes with your breathing. Instead of breathing comfortably, you breathe in a short, shallow manner, or you might even hold your breath. This gives you the sensation of running out of air and being unable to breathe, a common fear in this situation, and one that greatly increases fear of public speaking.

All this hurrying reduces the chance that your audience can enjoy your speech. It creates a barrier between you and them, which might have been your intention, but this will actually increase your fear. The less of a connection you have with them, the more unfriendly they will seem to you, and the more speech anxiety you will experience.

Fearful speakers often try to ignore the audience, hoping this will decrease their speech anxiety. For instance, lots of fearful speakers avoid eye contact with the audience. This prevents you from noticing any audience reaction. You won't notice when people seem more interested, or have questions.

When you have no audience contact, you focus on your own thoughts. And if you're a fearful speaker, your thoughts are virtually guaranteed to be far more negative, and unrealistic, than anything your audience might think or say. The result? More, rather than less, fear of public speaking.

Fighting to Hide Your Fear

Finally, efforts to hide your fear create the additional fear of being "found out" as a nervous person. This only adds to the public speaking anxiety you already experience.

It has another negative side effect. After you've given a speech, even if it has gone well, you may take no pride in your success because of this thought: "If they knew how afraid I was, they'd think less of me."

I've worked with many successful businesspeople who, despite their speech anxiety, actually presented frequently and did a good job. Unfortunately, because of their desire for secrecy, they thought they were "fooling people" and never felt satisfaction from their work. In order to progress and feel confident, they had to see that they were the ones being fooled - not the audience!

Breaking the Vicious Cycle
of Fear of Public Speaking

You can overcome the fear of public speaking, with a game plan based on three basic elements: an accepting attitude toward your fear, use of the AWARE steps, and a willingness to be the Speaker, rather than the Unspeaker.

Ready for more tips? Here's a good article about fear of public speaking.

Back to Home Page from Fear of Public Speaking